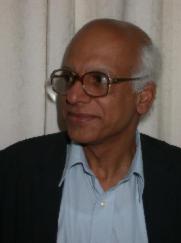 M. S. (Madabusi Santanam) Raghunathan is an Indian mathematician. He was born on 11 August 1941 in Anantapur, British India. He is currently Head of the National Centre for Mathematics, Indian Institute of Technology, Mumbai. Formerly Professor of eminence at TIFR in Homi Bhabha Chair. Raghunathan received his PhD in Mathematics from (TIFR), University of Mumbai; his advisor was M. S. Narasimhan. Raghunathan is a Fellow of the Royal Society, of the Third World Academy of Sciences, and of the American Mathematical Society and a recipient of the civilian honour of Padma Bhushan. Madabusi Santanam Raghunathan obtained BA (Hons) (Mathematics) (1960) from University of Madras. Thereafter, he joined Tata Institute of Fundamental Research (TIFR), Mumbai as Research Assistant and obtained PhD (Mathematics) (1966) from University of Bombay. He then joined TIFR as Associate Professor (1966) and continued to work there till his retirement. He is currently Professor of Eminence (2006- ) as DAE-Homi Bhabha Chair Professor at TIFR.

Raghunathan has made pioneering contributions in the area of algebraic groups and their discrete subgroups and is regarded as one of the leading researchers who have influenced development in the field. His work on the cohomology of arithmetic groups, congruence subgroup problem and contributions to the study of principal bundles in affine algebraic geometry are specially noteworthy. He has mentored about 10 students for their PhD. Raghunathan has been involved in the promotion of higher mathemtics in the country. As Chairman of the National Board for Higher mathematics (1987-2006), he initiated many programmes and projects for the development of mathematics. He was Member of the Executive Committee of the International Mathematical Union (1998-2006). As Chairman of the Governing Council of Harish Chandra Research Institute, Allahabad, he played a key role in its growth.