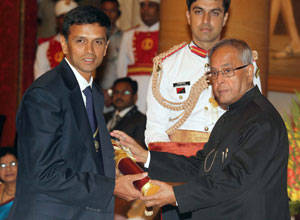 Rahul Dravid is a former Indian cricketer and captain, widely regarded as one of the greatest batsmen in the history of cricket. He was born on January 11, 1973 Indore, Madhya Pradesh, India. He did his schooling at St. Joseph's Boys High School, Bangalore and earned a degree in commerce from St. Joseph's College of Commerce, Bangalore. He was selected to India national cricket team while studying MBA in St Joseph’s College of Business Administration. It was at the age of twelve that Rahul started playing cricket. Soon he stared enjoying the game which further led him to falling in love with the game. Rahul played very well in domestic cricket matches and the Ranji Trophy. In August 2011, after receiving a surprise call in the ODI series against England, Dravid declared his retirement from ODIs as well as Twenty20 International (T20I), and in March 2012, he announced his retirement from international and first-class cricket. He appeared in the 2012 Indian Premier League as captain of the Rajasthan Royals. Rahul Dravid, along with Glenn McGrath were honoured during the seventh annual Bradman Awards function in Sydney on 1 November 2012. Dravid has also been honoured with the Padma Shri and the Padma Bhushan award, India's fourth and third highest civilian awards.