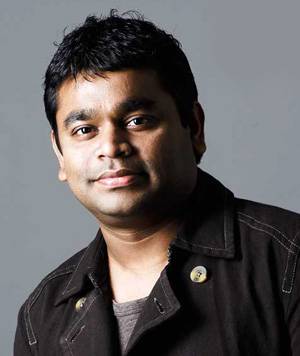 Allah-Rakha Rahman is an Indian composer, singer-songwriter, music producer, musician and philanthropist. He was born on 6 January 1967 in Chennai, Tamil Nadu, India. Since the age of 11, he began learning how to play musical instruments under the orchestra of Malayalam composer and close friend of his father, M.K. Arjunan. Eventually, he started playing for eminent composers of those times, M. S. Viswanathan, Ilaiyaraaja, Ramesh Naidu, and Raj-Koti. During these years, he even worked as a keyboard player and an arranger in a band named "Roots", along with friends Sivamani, John Anthony, Suresh Peters, Jojo, and Raja. Opportunities flowed in as he was offered to accompany music legends Zakir Hussain, Kunnakudi Vaidyanathan, and L. Shankar on world tours, thereby winning him a scholarship from Trinity College, London, board of the Trinity College of Music. The family followed the Hinduism religion until 1984 when he was introduced to Islam by a Sufi when his sister fell terribly ill. Eventually, Rahman, along with his other family members, converted to Islam in 1989, at 23 years old. Thereafter, he changed his name from A.S. Dileep Kumar to A.R. Rahman, or Allah Rakha Rahman.

Rahman's first composition came at the mere age of nine in 9175 when he accidentally played a tune on the piano in the presence of his father. Later, the recording was converted into a full-fledged song 'Vellithen Kinnam Pol' by his father for the Malayalam movie 'Penpada'. Nevertheless, his actual music career began only in 1992 with composing music scores for documentaries, jingles for advertisements and Indian Television channels, and other smaller projects. He used to record music at a recording and mixing studio in his backyard, Panchathan Record Inn, which is today one of the most advanced recording studios in India and one of Asia's most sophisticated and ultra-modern studios. His first film composing came with Mani Ratnam's Tamil film 'Roja', which bagged him the Rajat Kamal award for Best Music Director at National Film Awards. Thereafter, there was no looking back for Rahman as he went on to compose some of the most memorable and exceptional music scores and soundtracks for both Indian and foreign movies. He has been awarded the Rajat Kamal Award thrice again for 'Minsaara Kanavu' in 1997, 'Lagaan' in 2002, and 'Kannathil Muthamittal' in 2003, a record for any composer. His popular films include 'Bombay', 'Kadhalan', 'Indira', 'Muthu', 'Love Birds', 'Rangeela', 'Taal', 'Dil Se', 'Saathiya', 'Guru', and 'Rang De Basanti'. His style of music combined natural sounds with classical, folk, jazz, reggae, soft rock and other varied styles of music.

Rahman was the 1995 recipient of the Mauritius National Award and the Malaysian Award for his contributions to music, and was nominated for a Laurence Olivier Award for his first West End production. A four-time National Film Award winner and recipient of six Tamil Nadu State Film Awards, he has fifteen Filmfare Awards and thirteen Filmfare Awards South for his music. Rahman has received a Kalaimamani from the Government of Tamil Nadu for excellence in the field of music, musical-achievement awards from the governments of Uttar Pradesh and Madhya Pradesh and a Padma Shri from the Government of India. In 2006, he received an award from Stanford University for his contributions to global music. The following year, Rahman entered the Limca Book of Records as "Indian of the Year for Contribution to Popular Music". He received the 2008 Lifetime Achievement Award from the Rotary Club of Madras. In 2009, for his Slumdog Millionaire score, Rahman won the Broadcast Film Critics Association Award, the Golden Globe Award for Best Original Score, the BAFTA Award for Best Film Music and two Academy Awards (Best Original Score and Best Original Song, the latter shared with Gulzar) at the 81st Academy Awards. He has received honorary doctorates from Middlesex University, Aligarh Muslim University, Anna University in Chennai and Miami University in Ohio. The composer has won two Grammy Awards: Best Compilation Soundtrack Album and Best Song Written for Visual Media. Rahman received the Padma Bhushan, India's third-highest civilian honour, in 2010. His work in 127 Hours won him Golden Globe, BAFTA, and two Academy Award nominations (Best Original Music Score and Best Original Song) in 2011. Rahman is an Honorary Fellow of the Trinity College of Music.