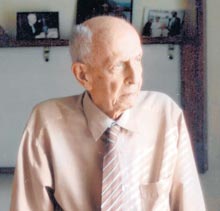 Dr. Keki Byramjee Grant was an Indian cardologist from Pune, Maharashtra, one of the first and respected cardiologists in the country and the founder of Grant Medical Foundation, which runs the Ruby Hall Clinic, a nationally accredited hospital in Pune. The Government of India honoured him, posthumously in 2011, with Padma Bhushan, the third highest civilian award, for his services to the medical science. He was born on 28 November 1920 in Tamil Nadu, India. Keki graduated from Wadia College, Pune and joined Grant Medical College and Sir Jamshedjee Jeejeebhoy Group of Hospitals, Mumbai from where he secured his MBBS. Grant started the practice as a Physician under E. H. Cowaji for a monthly stipend of â?¹200. A year later, he started teaching at the Sassoon General Hospital, named after the Governor General, David Sassoon, and moved his practice to Jehangir Hospital, Pune. Breaking his practice, he did his post graduation in cardiology, under the guidance of cardiologist, Paul White, at the Mass General Hospital, Boston, Massachusetts, USA and later returned to Jehangir Hospital to resume practice.

Grant started Ruby Hall Clinic, 1959, with the facility to accommodate 4 in-patients. The hospital, over a period of time, grew to become a 550-bed hospital, and the first nationally accredited hospital in Pune. He was successful in bringing coronary angioplasty, Coronary Artery Bypass Grafting, CT Scan, Magnetic Resonance Imaging, image intensifier X-Ray, cadaveric organ donation and the first Image Guided Radio Therapy (IGRT) for cancer to Ruby Hall and thus making it an advanced centre of medical care. The hospital is reported to have the highest number of ICU beds, counting 76, in the country.