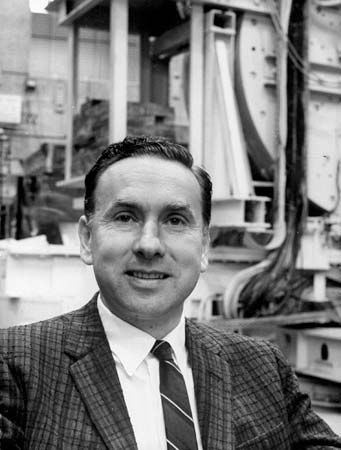 Robert Hofstadter was an American physicist. He was the joint winner of the 1961 Nobel Prize in Physics "for his pioneering studies of electron scattering in atomic nuclei and for his consequent discoveries concerning the structure of nucleons". Hofstadter was born in Manhattan, New York, on February 5, 1915. Hofstadter was educated at Princeton University, where he earned a Ph.D. in 1938. As a physicist at the National Bureau of Standards during World War II, he was instrumental in developing the proximity fuse, which was used to detonate antiaircraft and other artillery shells. He joined the faculty of Princeton in 1946, where his principal scientific work dealt with the study of infrared rays, photoconductivity, and crystal and scintillation counters. In 1958 Hofstadter was elected to the National Academy of Sciences and became a Guggenheim Fellow. The following year he was named California Scientist of the Year. Later he received the U.S. National Medal of Science.