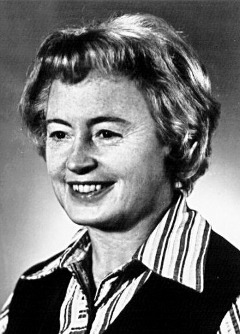 Eleanor Margaret Burbidge is a British-born American astrophysicist, noted for original research and holding many administrative posts, including Director of the Royal Greenwich Observatory. She was born on August 12, 1919 in Davenport, Greater Manchester, Stockport, United Kingdom. Burbidge started studying astronomy in 1936, at University College, London, was graduated in 1939, and received her Ph.D. at University College in 1943. She was turned down for a Carnegie Fellowship in 1945 because the fellowship would have meant that she would have had to observe at Mount Wilson observatory, which was reserved only for men at that time. Burbidge garnered many awards, including the Helen Warner Prize, which she was given with her husband by the American Astronomical Society in 1959, an organization that Burbidge herself became president of from 1976 to 1978; the Bruce Medal, given by the Astronomical Society Pacific in 1982; the National Medal of Science, given in 1984; the Russell Prize, given in 1984; and the Albert Einstein World Award of Science Medal, given in 1988. She was also elected to the National Academy of Sciences in 1978. In 1990 Burbidge became a professor emeritus.