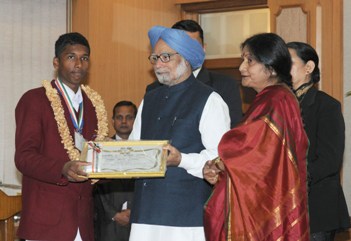 Abhishek Ekka, 14, who would be conferred with one of the prestigious Coveted Bravery National Award by the Prime Minister on the Republic Day in New Delhi. Abhishek has showed signs of courage and bravery at a young age when he saved his drowning friend from a 40 feet deep well at Kansabel block of tribal Jashpur district. He is the only kid from Chhattisgarh to be conferred with the award.

Abhishek's friend Himanshu Agrawal was attacked by a dog, who, in the quest to save his life while running, fell into a 40 feet deep well in his house. When Abhishek heard his screams, he ran towards the well to rescue his friend. Without worrying for his own life Abhishek jumped into the well which was filled with water up to 25 feet. Indian Council for Child Welfare, New Delhi, has zeroed down upon 25 children who would be receiving National Bravery award. Talking to TOI, Abhishek Ekka said, "I did it for my friend and never expected such overwhelming response. I am very happy and I am excited to participate in the Republic Day Parade."