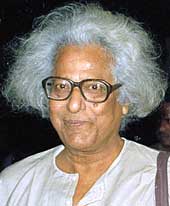 Subhash Mukhopadhyay was one of the foremost Bengali poets of the 20th century. He is also known as the "podatik kobi" in the field of Bengali literature .A book of thirty of Subhash's best known poems in English translation, titled 'As Day is Breaking', was published in 2014 by Anjan Basu,a Bangalore-based writer/critic. The book includes a rather detailed introduction to the poet's work as well. Mukhopadhyay was born in 1919 in Krishnanagar, a town in Nadia district in the province of West Bengal. An excellent student, he studied philosophy at the Scottish Church College in Calcutta, graduating with honours in 1941. His first book was published in the year 1940 while he was a student. Critics regard as his poetry work, Padatik (The Foot-Soldier) as the milestone in the development of Bengali literature. Whole throughout the life, he remained as an advocate of the indivisibility of the Bengali people and Bengali culture. Till 1950’s his works reflected communist ideas and thoughts while later on, his works became more personal and introspective. Mukhopadhyay received numerous awards and honours in his lifetime, including the two highest literary prizes in India: the Sahitya Akademi Award in 1964 (for Joto Dureii Jai), and the Jnanpith Award in 1991. The Government of India awarded the civilian honour of the Padma Bhushan in 2003. He died in Kolkata in July 2003 aged 84.