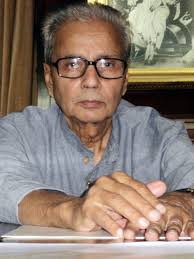 Kedarnath Singh is one of the most prominent modern poets writing Hindi. He is also an eminent critic and essayist. He was awarded the Jnanpith Award(2013), Sahitya Akademi Award(1989) in Hindi for his poetry collection, Akaal Mein Saras. Kedarnath Singh was born on July 7, 1934 in Chakia village of Ballia district, Uttar Pradesh. His graduation was completed at Uday Pratap College Varanasi. Later he completed PG and PhD from Kashi Hindu Vishwavidyalaya and started his career as a part time Hindi teacher at Gorakhpur. Later he joined Jawaharlal Nehru University as a faculty, later promoted to professor and HOD Hindi Literature. He was associated with JNU till his retirement. Currently he lives in Delhi.

Kedarnath’s poems are known for its simple language, though complex ideas. He uses everyday language for penning poems. Bagh, a long poem with the tiger as its central character is one of his prominent works, which has been included in the text books of many universities. It is one of the widely recited poems since it was published in the 1980s. He has edited an anthology of Hindi poetry after 1960 for the Sahitya Akademi and has also done translation works for a few poetic works to Hindi. He was associated with the Progressive Writers’ Movement in the central hub of Banaras.