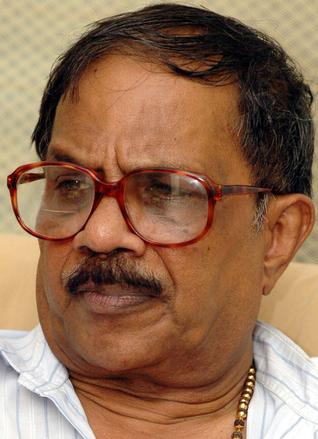 M. T. Vasudevan Nair is a noted writer, script writer and director of Malayalam. His novel Randamoozham is widely credited as his masterpiece. He is the receiver of the highest literary award in India, Jnanpith (1995) as well as India's third highest civilian honour Padma Bhushan. His works are normally regarded as milestone works of Malayalam literature as well as cinema and M.T – Hariharan team has given numerous landmark movies to Malayalam.  He is one of the great writers of Malayalam who has penned the beauty of river Nila with perfectness. Actually he resided on the banks of river Nila at his younger age and it reflected well in his literary pieces too.

Vasudevan was born on 10th august 1933 in Kudallur of Palakkad district. He spent his early childhood days in Punnayurkonam of Thrissur. He completed his schooling from Kumaranelloor High School and obtained a degree in chemistry from Victoria College, Palakkad. His career started with short stories published in magazines. "Valarthumrugangal", in 1953 was his first significant work. It told the story of circus artists.  His most popular short stories include - Iruttinte Athmavu, Olavum Theeravum, Bandhanam, Varikkuzhi, Dare-e-Salam, Swargam Thurakkunna Samayam, Vaanaprastham and Sherlock. He published his first novel, Naalukettu in the year 1958. After that, he didn’t look back and has become one of the living legends of Malayalam literature as well as cinema.

He has received Honorary Doctorate from University of Calicut, Netaji Subhas Open University and Mahatma Gandhi University. He received Kendra Sahitya Academy award for Kaalam in 1970 and has won Kerala Sahitya Academy awards thrice for Naalukettu, Gopura Nadayil and Swargam Thurakkunna Samayam. He has received 7 National awards for best feature film and screenplay collective and has won 21 State awards in different categories. He has also received Vayalar Award for Randamoozham, Odakkuzhal Award for Vanaprastham, Muttathu Varkey Award and many more.