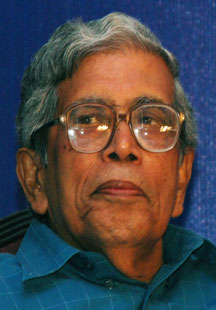 Sitakant Mahapatra is an Indian poet and literary critic in English and Oriya language. He served in the Indian Administrative Service from 1961 to 1995. He also was in many ex-officio posts including the Chairman of National Book Trust in New Delhi. His works include more than 15 poetry collection, 5 essay collection, 30 contemplative works, one travelogue and numerous translations. Some of his important works are Sabdar Akash, Samudra and Anek Sharat. He was born on 17th September 1937 in Mahange village in the banks of Chitrotpala in Orissa. He used to recite the Oriya version of Bhagwad Gita in his younger days. He studied at Korua Government High School and then joined Ravenshaw College at Cuttack affiliated to Utkal University. There he did his B. A. in history honors in 1957 and then finished his Master’s degree in political science at Allahabad University in 1959. When he was working as an editor in the university journal he started to write in English and Oriya. He finished a Diploma in Overseas Development Studies at the Cambridge University in 1969 under the Colombo Plan Fellowship.

In 1974 he was awarded Sahitya Akademi award in Oriya for his collection of poetry named Sabdar Akash. He received Jnanpith Award in 1993 for his contribution to the Indian literature. He got Padma Bhushan Award in 2002, Sarala Award in 1985, Award of the Highest Honor by Soka University of Tokyo in 2001, etc. He is also selected for Padma Vibhushan award in 2011. His first collection of poetry was in Oriya named Dipti O Dyuti which was published in 1963 and his second work Ashtapadi was released in 1967. This won him Orissa Sahitya Akademi award. His work Sara Akash won him Sahitya Akademi award. Some of his notable works are Ashtapadi, Shabdara Akasha, Ara Drushya, Shrestha Kavita, Sabda Svapna O nirvikata, Aneka Sarata, Ushavilasa, The ruined Temple and other poems, Unending Rhythms, etc.