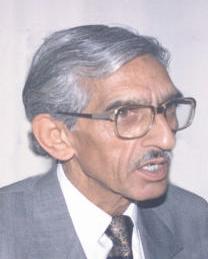 Abdur Rehman Rahi is a Kashmiri poet, translator and critic. He was awarded the Indian Sahitya Akademi Award in 1961 for his poetry collection Nawroz-i-Saba, the Padma Shri in 2000, and India's highest literary award, the Jnanpith Award (for the year 2004) in 2007. He is the first Kashmiri writer to be awarded the Gyanpith, India's highest literary award for his poetic collection Siyah Rud jearen Man. He was born on March 6, 1925 in Srinagar. Rehman Rahi began his career as a clerk in the Public Works Department of the Government for a brief period in 1948 and was associated with the Progressive Writers' Association, of which he became the General Secretary. He also edited a few issues of Kwang Posh, the literary journal of the Progressive Writer's Association. He was later a sub-editor in the Urdu daily Khidmat. He did an M.A. in Persian (1952) and in English (1962) from Jammu and Kashmir University where he taught Persian. He was on the editorial board of the Urdu daily Aajkal in Delhi from 1953 to 1955.He was also associated with the Cultural wing of communist Party of Kashmir during his student days.As translator he did excellent translation of Baba Farid's Sufi poetry to Kashmiri from Original Punjabi.Camus and Sartre are some visible effects on his poems while Dina nath Naadim's influence on his poetry is also visible especially in earlier works.