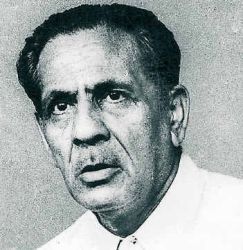 Raghupati Sahay, better known under his pen name Firaq Gorakhpuri was a writer, critic, and one of the most noted contemporary Urdu poets from India. He established himself as one of the greats in an era which boasted stalwarts like Iqbal, Yagana Changezi, Jigar and Josh. Raghupati Sahay was born in 1896, in Gorakhpur, into a Hindu family. He was selected for the Provincial Civil Service (P.C.S.) and the Indian Civil Service (I.C.S.), but he resigned to follow Mahatma Gandhi's Non-cooperation movement, for which he went to jail. Later, he joined Allahabad University as a lecturer in English literature. It was there that he wrote most of his Urdu poetry, including his magnum opus Gul-e-Naghma which earned him the highest literary award of India, the Jnanpith Award, and also the 1960 Sahitya Akademi Award in Urdu. During his life, he was given the positions of Research Professor at the University Grants Commission and Producer Emeritus by All India Radio. After a long illness, he died on March 3, 1982, in New Delhi.