Tongam Rina CNN-IBN Indian of the Year Awarded In 2014 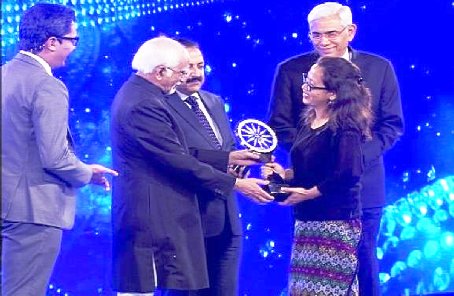 Tongam has been around, breaking and covering major news stories almost since the very advent of journalism in Arunachal Pradesh. What strikes your attention at first glance at the ‘The Arunachal Times’ is her column the RINGSIDE VIEW. Her columns in the RINGSIDE VIEW are so precise and written in a lively, exciting and attention-catching style which has earned her universal adulation.Although she was attacked, harassed and opposed for her views, Tongam continued ‘to speak, to write and to publish whatever on any subject’. A role model for women journalists the brave defender of freedom of the press, Tongam in yet another incident of violence was waylaid and shot by two men, the bullet tearing through her stomach and hitting her vertebrae.

She was shot at from point blank range by an unidentified gunman around 6.16 pm while she was about to enter her office premises. She was immediately rushed to Ramakrishna Mission Hospital Itanagar, where she remained in intensive care and is said to have sustained serious injuries to the spinal cord and intestines. But Tongam being Tongam, she just woke up after surgery and asked for a glass of beer. That’s her, courageous of spirit and action, just like her writing. The reason behind the attack is unknown, though Rina has reportedly received threats in the past.She won CNN-IBN Indian of the Year for Public Service category in 2014.