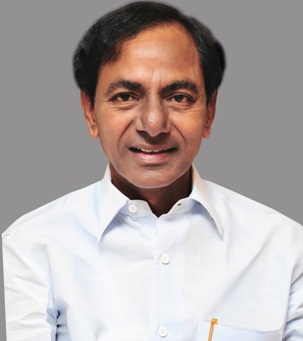 Kalvakuntla Chandrashekar Rao (born on 17 February 1954), well popularly known and abbreviated it as KCR,is the first and the current Chief Minister of the Indian state of Telangana,. He is the president of the Telangana Rashtra Samithi, a Regional Party in India.He is a Member of the Legislative Assembly (Telangana) from the Gajwel constituency of Medak District in Telangana. Previously, he served as the Member of the Legislative Assembly (Andhra Pradesh) from Siddipet and also as the Member of Parliament from Mahbubnagar and Karimnagar.He took oath as the first Chief Minister of the new state of Telangana on 2 June 2014.He awarded popular choice CNN-IBN Indian of the Year 2014.