Azim Premji CNN-IBN Indian of the Year Awarded In 2014 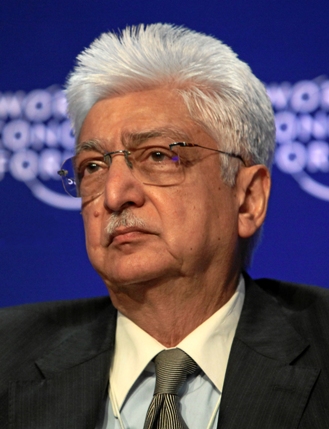 Azim Hashim Premji (born 24 July 1945) is an Indian business tycoon and philanthropist who is the chairman of Wipro Limited, informally known as the Czar of the Indian IT Industry. He was responsible for guiding Wipro through four decades of diversification and growth to finally emerge as one of the global leaders in the Software Industry. According to Forbes, he was the richest Indian during the 1999-2005 period and is currently the third wealthiest Indian, and the 61st richest person in the world, with a personal wealth of $19.2 billion in 2015.In 2010, he was voted among the 20 most powerful men in the world by Asiaweek.

He has twice been listed among the 100 most influential people by TIME Magazine, once in 2004 and more recently in 2011.Premji owns 73% percent of Wipro and also owns a private equity fund, PremjiInvest, which manages his $1 billion worth of personal portfolio. In 2013 he gave away 25 per cent of his personal wealth to charity and has also pledged to give away the rest of 25% in the next 5 years.He won CNN-IBN Indian of the Year Outstanding Achievement Award in 2014.