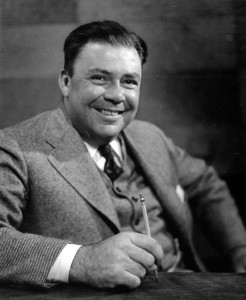 Nathaniel Alexander Owings was an American architect, a founding partner of Skidmore, Owings and Merrill (SOM), which became one of the largest architectural firms in the United States and the world. Owings viewed skyscrapers as his firm's specialty. His reputation rested on his ability to be what he called "the catalyst," the person in his firm who ironed out differences among clients, contractors and planning commissions. He was born on February 5, 1903 in Indianapolis, Indiana, United States. Owings first job as an architect was with the New York firm of York and Sawyer. As a young architect, Owings was impressed with Raymond Hood, who designed the RCA Building in Rockefeller Center. More than 50 years later, Owings described his first glimpse of the 70-story skyscraper as a breathtaking "knife edge, presenting its narrow dimension to Fifth Avenue." In 1983, he received the AIA Gold Medal.