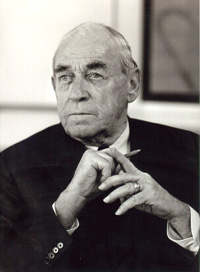 Hugo Alvar Henrik Aalto was a Finnish architect and designer, as well as a sculptor and painter. He was born on February 3, 1898 in Kuortane, Finland. Aalto’s architectural studies at the Technical Institute of Helsinki were interrupted by the Finnish War of Independence, in which he participated. Following his graduation in 1921, Aalto toured Europe and upon his return began practice in Jyväskylä, in central Finland. In 1927 he moved his office to Turku, where he worked in association with Erik Bryggman until 1933, the year in which he moved to Helsinki. In 1963, he received the AIA Gold Medal. Aalto wrote little to explain his work, but his architecture conveyed a variable, lively temperament, free from dogma and without monotony. His work was said to express the spirit of Finland and its people, primitive yet lyrical. His friendships with such artists as Fernand Léger, Jean Arp, and Constantin Brancusi may have nourished his fondness for curvilinear shapes. While his work was never compulsively innovative, neither was it static. His late designs showed an increased complexity and dynamism that some regarded as incautious. In particular, his work of the late 1960s and early 1970s was marked by splayed, diagonal shapes and clustered, overlapping volumes. Energy and imagination were ever present.