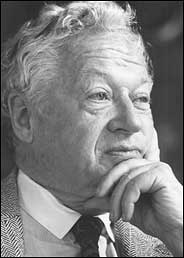 Benjamin C. Thompson known as Ben Thompson, was an American architect. He was born on July 3, 1918 in Saint Paul, Minnesota, United States. He graduated from Yale University in 1941, then spent four years in the United States Navy fighting in World War II. After the war, he moved to Lexington, Massachusetts, where he participated in the design and creation of Six Moon Hill, a neighborhood of modern houses. Thompson began his career as an architect in 1946, when he helped persuade Walter Gropius and six other architects to form The Architects' Collaborative (TAC) in Cambridge, Massachusetts. After World War II, Mr. Thompson and six colleagues founded TAC, the Architects Collaborative, in Cambridge. They were joined by Walter Gropius, a leading figure at the Bauhaus, whom Mr. Thompson succeeded in 1963 as chairman of the Graduate School of Design at Harvard.  After 20 years at TAC, Mr. Thompson founded Benjamin Thompson and Associates. His five-story, all-glass showcase for Design Research opened in Cambridge in 1970. Architectural Record said the transparent structure "points the way to a method of glass building that could create a warmer city, adding color and light and optimism to the life of the streets." In 1992, he received the AIA Gold Medal.