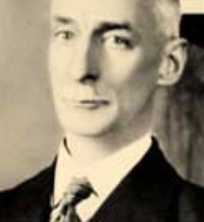 Howard Van Doren Shaw was an American architect. He became one of the best-known architects of his generation in the Chicago, Illinois area. Shaw was considered a leader in the American Craftsman movement, best exemplified in his 1900 remodel of Second Presbyterian Church in Chicago. He designed Marktown, Clayton Mark's planned worker community in Northwest Indiana. Howard Van Doren Shaw was born in Chicago, Illinois on May 7, 1869. In 1906, he became a member of the American Institute of Architects and was made a Fellow the following year. He was awarded its AIA Gold Medal shortly before his death in 1926. In the early 20th century, Shaw became the most recognized designer of country houses in Lake Forest. He typically designed houses either as an elongated rectangle, or as a building surrounding a courtyard. Shaw preferred to do the landscaping himself, but also collaborated with renowned landscape architect Jens Jensen. As housing desirability for the wealthy waned in Hyde Park, it grew in the Gold Coast, and Shaw quickly became the prominent architect in this neighborhood.

In 1921, Shaw was again contracted by R. R. Donnelley to built a printing plant, this time in Crawfordsville, Indiana. Donnelley would later commission a second Lakeside Press Building. Shaw also began to develop apartment buildings for the Gold Coast at this time. Shaw was a trustee at the Art Institute of Chicago and was asked to build several additions, including the central courtyard. He designed two fraternity houses for the University of Illinois at Urbana-Champaign and one at the University of Chicago. He died on May 7, 1926 in Baltimore, Maryland, United States.