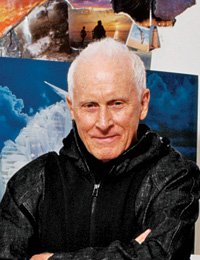 Antoine Predock is an American architect based in Albuquerque, New Mexico. Antoine Predock is the Principal of Antoine Predock Architect PC. The studio was established in 1967. He was born in 1936 in Lebanon, Missouri, United States. Predock first gained national attention with the La Luz community in Albuquerque, New Mexico. The Nelson Fine Arts Center at Arizona State University was his first nationally won design competition. Predock's work includes the Turtle Creek House, built in 1993 for bird enthusiasts along a prehistoric trail in Texas, the Tang Teaching Museum and Art Gallery at Skidmore College, and a new ballpark for the San Diego Padres. He has also worked on international sites such as the National Palace Museum Southern Branch in Southern Taiwan and the Canadian Museum for Human Rights in Winnipeg, Manitoba. In 1985, Antoine Predock was awarded the Rome Prize. In 1989, he won a New Mexico Governor's Award for Excellence in the Arts. In 2006, he won the AIA Gold Medal. In 2007, Predock was awarded a Lifetime Achievement Award from the Cooper-Hewitt National Design Museum. In 2010, Predock was named a Senior Fellow of the Design Futures Council.