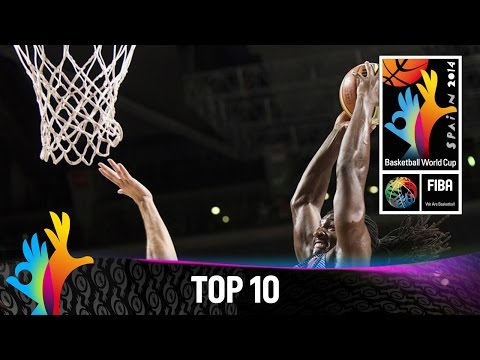 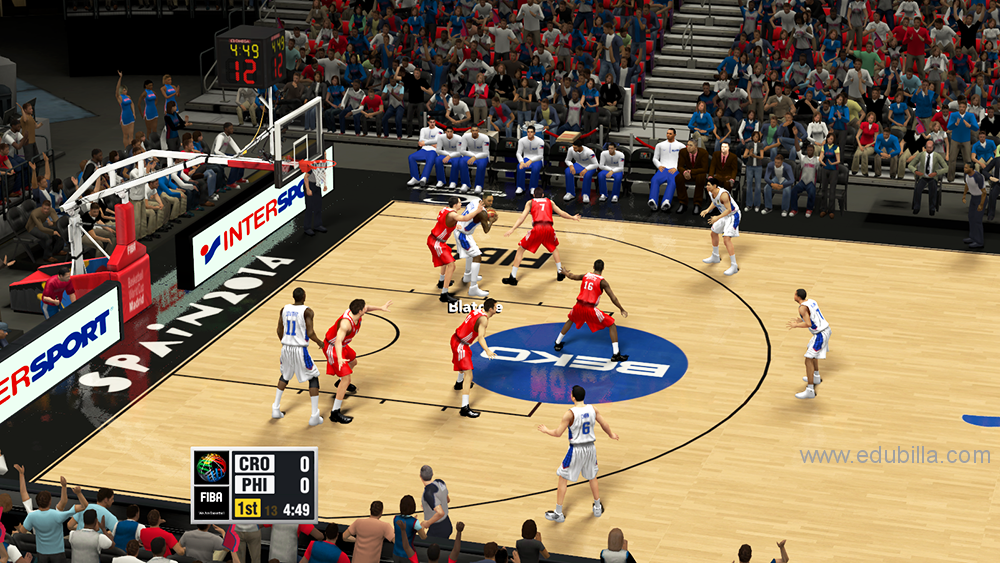 Basketball is a sport played by two teams of five players on a rectangular court. The objective is to shoot a ball through a hoop 18 inches (46 cm) in diameter and 10 feet (3.0 m) high mounted to a backboard at each end. Basketball is one of the world's most popular and widely viewed sports.

A team can score a field goal by shooting the ball through the basket during regular play. A field goal scores three points for the shooting team if the player shoots from behind the three-point line, and two points if shot from in front of the line. The team with the most points at the end of the game wins, but additional time (overtime) is issued when the game ends in a draw. The ball can be advanced on the court by bouncing it while walking or running or throwing it to a team mate. It is a violation to lift or drag one's pivot foot without dribbling the ball, to carry it, or to hold the ball with both hands then resume dribbling.

As well as many techniques for shooting, passing, dribbling and rebounding, basketball teams generally have player positions and offensive and defensive structures (player positioning). Traditionally, the tallest and strongest members of a team are called a center or power forward, while slightly shorter and more agile players are called small forward, and the shortest players or those who possess the best ball handling skills are called a point guard or shooting guard.

If you want to play basketball for fun, you have the possibility of playing on your own. But you can also play team games with either 1, 2, 3, 4 or 5 players on each teams. Teams can be mixed, with boys and girls, or not.

On a competition level, a team is made up of 5 players playing on the court and 5 players sitting on the bench that can be used for substitution during the whole period of the game.

Each player is assigned a position when playing. This position is usually determined by the height of the player.

A player scores when he manages to throw the ball into the basket, with the ball passing through the basket from above the hoop. Scoring a basket increases the team’s score by 3, 2 or one point.

If the player successfully shoots from outside of the 3 points line, the basket is worth 3 points, otherwise it is worth 2 points.

It is also possible to score one point when shooting from the free throw line, after a foul for instance.

A violation occurs when the player breaks one of the rules of Basketball. A violation results in the awarding of the ball to the opponents.

It can also result from the player taking more than 2 steps without bouncing the ball on the floor. This is called Traveling.

Another example of violation occurs when a player stops dribbling and then starts dribbling again or when he bounces the ball with both hands on the ball. We call this a double Dribble.

A violation is also committed if you twist your hand, when in contact with the ball, beyond the vertical, bringing it under the ball. This is called Carry, as the hand must always remain on the top of the ball.

Fouls:
A foul is an illegal action that can be committed by player from one team against a player from the opposing team. Basketball is generally said to be a non-contact game. If contact occurs beyond what is deemed to be reasonable, or if a player thereby obtains an unfair advantage from it, a foul is committed.
There are two types of fouls. The first are called defensive fouls. They occur when the offensive player is being fouled by the defender. Defenders should not block, push, trip, strike or hold the player in possession of the ball. The second ones are the offensive fouls. For example, a player in offence commits a foul when charging into a stationary defender.
Detailed Basket Ball Rules Can Be Downloaded From Documents

The rigid rectangular board behind the rim.

The basket ball is an inflated sphere with an outer covering. It is 75 to 78cm in circumference and weighs 600 to 650 grams. It must be made of leather in official FIBA competition.

The goal, made up of a horizontal and circular metal rim with a net hanging from it.. It is mounted 3.05 m above floor level.

The clock that counts down the maximum 24 seconds the offence is allowed to possess the ball before shooting.

Detailed Equipment Description Can be Downloaded From Documents

The game of basketball as we know it today was created by Dr. James Naismith in 1891 to condition young athletes during the winter. It consisted of peach baskets and a soccer style ball. He published 13 rules for the new game. He divided his class of 18 into 2 teams of 9 players each and set about to teach them the basics of his new game. The objective of the game was to throw the basketball, into the fruit baskets nailed to the lower railing of the gym balcony. Every time a point was scored, the game was halted so the janitor could bring out a ladder and retrieve the ball. After a while, the bottoms of the fruit baskets were removed. The first public basketball game was played in Springfield, Massachusetts, on March 11, 1892.

There were only thirteen rules of “basket ball”.

The ball may be thrown in any direction with one or both hands.

The ball may be batted in any direction with one or both hands.

A player cannot run with the ball, the player must throw it from the spot on which he catches it, allowance to be made for a man who catches the ball when running at good speed.

The ball must be held in or between the hands, the arms or body must not be used for holding it.

No shouldering, holding, pushing, tripping or striking in any way the person of an opponent shall be allowed. The first infringement of this rule by any person shall count as a foul, the second shall disqualify him until the next goal is made, or if there was evident intent to injure the person, for the whole of the game, no substitute.

A foul is striking the ball with the fist, violation of rules 3 and 4, and such as described in rule 5.

If either side makes three consecutive fouls it shall count a goal for opponents.

A goal shall be made when the ball is thrown or batted from grounds into the basket and stays there If the ball rests on the edge and the opponent moves the basket it shall count as a goal.

When the ball goes out of bounds it shall be thrown into the field, and played by the person first touching it. In case of a dispute the umpire shall throw it straight into the field. The thrower in is allowed five seconds, if he holds it longer it shall go to the opponent. If any side persists in delaying the game, the umpire shall call a foul on them.

The umpire shall be the judge of the men, and shall note the fouls, and notify the referee when three consecutive fouls have been made.

The referee shall be the judge of the ball and shall decide when the ball is in play, in bounds, and to which side it belongs, and shall keep the time. He shall decide when a goal has been made, and keep account of the goals with any other duties that are usually performed by a referee.

The time shall be fifteen minute halves, with five minutes rest between.

The side making the most goals in that time shall be declared the winner. In case of a draw the game may, by agreement of the captains, be continued until another goal is made

On December 21, 1891, James Naismith published rules for a new game using five base ideas and thirteen rules. That day, he asked his class to play a match in the Armory Street court: 9 versus 9, using a soccer ball and two peach baskets. Frank Mahan, one of his students, wasn’t so happy. He just said: "Harrumph. Another new game". However, Naismith was the inventor of the new game. Someone proposed to call it “Naismith Game”, but he suggested "We have a ball and a basket: why don’t we call it basket ball"?

The Eighteen Players Were:

John J. Thompson, Eugene S. Libby, Edwin P. Ruggles, William R. Chase, T. Duncan Patton, Frank Mahan, Finlay G. MacDonald, William H. Davis and Lyman Archibald, who defeated George Weller, Wilbert Carey, Ernest Hildner, Raymond Kaighn, Genzabaro Ishikawa, Benjamin S. French, Franklin Barnes, George Day and Henry Gelan 1–0.The goal was scored by Chase. There were other differences between Naismith’s first idea and the game played today. The peach baskets were closed, and balls had to be retrieved manually, until a small hole was put in the bottom of the peach basket to poke the ball out using a stick. Only in 1906 were metal hoops, nets and back boards introduced. Moreover, earlier the soccer ball was replaced by a Spalding ball, similar to the one used today.

The abbreviation 'FIBA' derives from the French 'Fédération Internationale de Basketball Amateur'. The Word 'Amateur' was dropped in 1986 after the distinction between Amateurs and Professionals was eliminated. The 'A' in FIBA was however left. This was for reasons of tradition and also because of the 'BA' at the beginning of our sport, BASKETBALL!

FIBA, the world governing body for basketball, is an independent association formed by 213 National federations of basketball throughout the world

FIBA is a non-profit making organization and, in principle, does not pursue any objective of economic character for its own gains

The headquarters of FIBA are established in Mies, Switzerland.

FIBA controls and governs the appointment of international referees

FIBA regulates the transfer of players from one country to another

Rookie of the Year Award

Defensive Player of the Year Award

Sixth Man of the Year Award

Teammate of the Year Award

Comeback Player of the Year Award

Coach of the Year Award

Executive of the Year Award 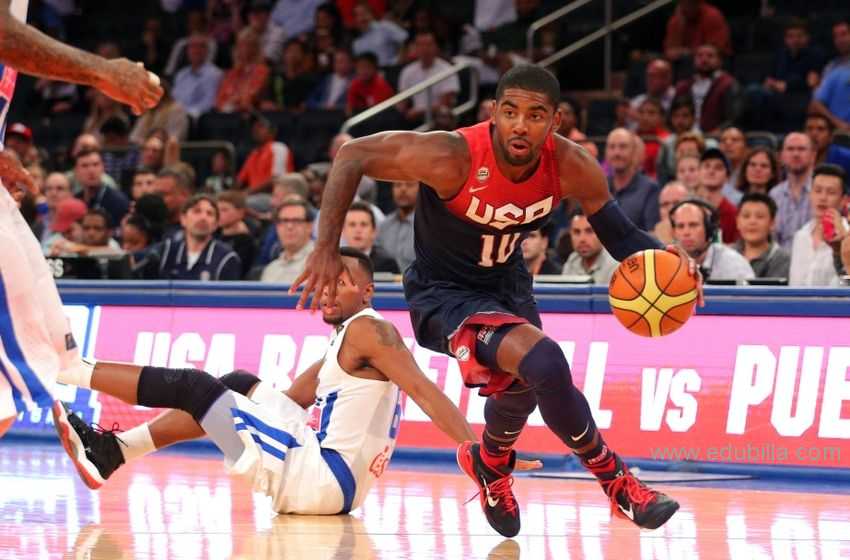 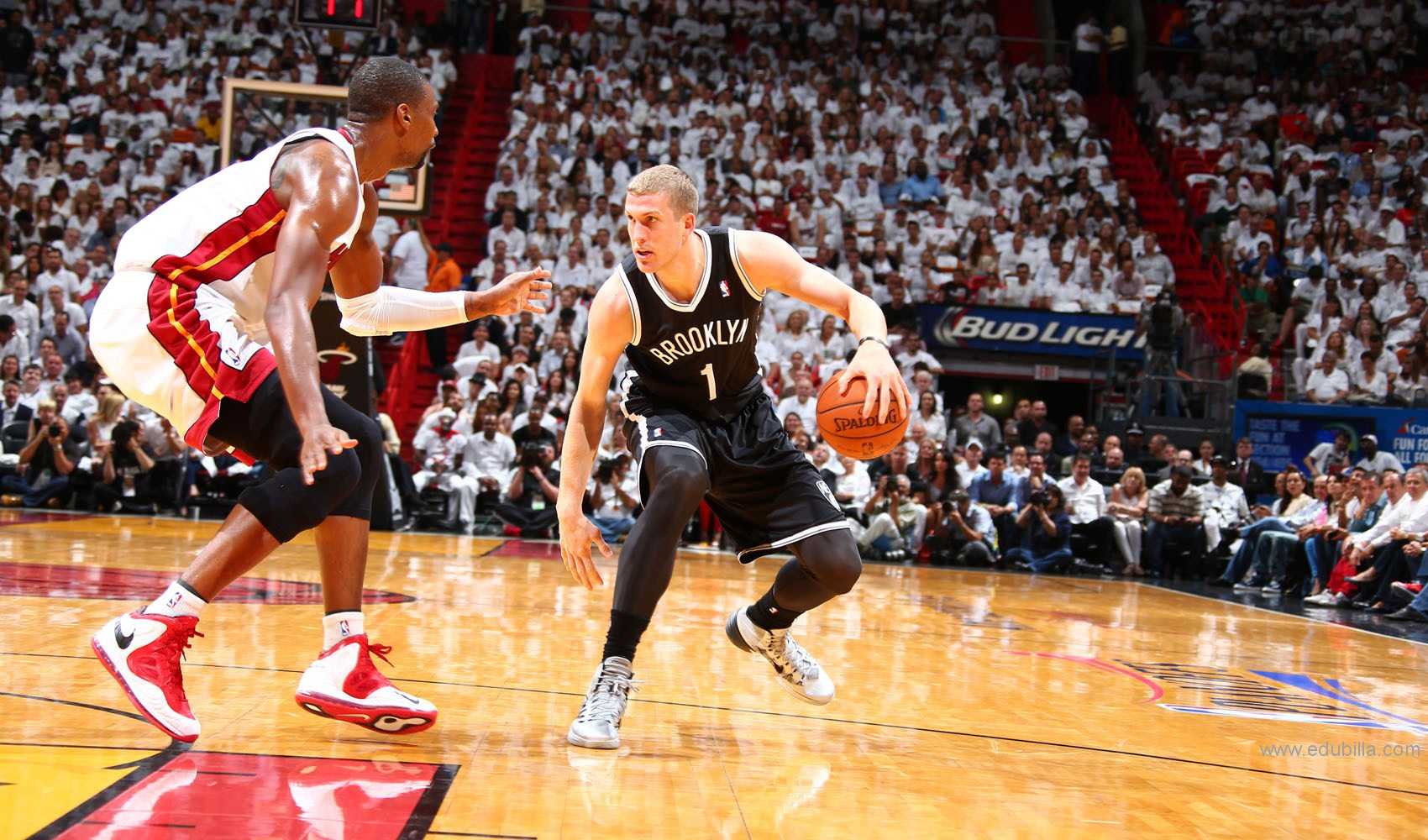