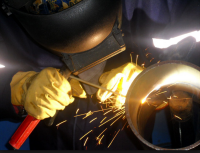 An electric current, in the form of either alternating current or direct current from a welding power supply, is used to form an electric arc between the electrode and the metals to be joined. The workpiece and the electrode melts forming the weld pool that cools to form a joint. As the weld is laid, the flux coating of the electrode disintegrates, giving off vapors that serve as a shielding gas and providing a layer of slag, both of which protect the weld area from atmospheric contamination.

Because of the versatility of the process and the simplicity of its equipment and operation, shielded metal arc welding is one of the world's first and most popular welding processes. It dominates other welding processes in the maintenance and repair industry, and though flux-cored arc welding is growing in popularity, SMAW continues to be used extensively in the construction of heavy steel structures and in industrial fabrication. The process is used primarily to weld iron and steels but aluminium, nickel and copper alloys can also be welded with this method.

In 1885, Nikolay Benardos and Stanis?aw Olszewski developed carbon arc welding,obtaining American patents from 1887 showing a rudimentary electrode holder. In 1888, the consumable metal electrode was invented by Nikolay Slavyanov. Later in 1890, C. L. Coffin received U.S. Patent 428,459 for his arc welding method that utilized a metal electrode. The process, like SMAW, deposited melted electrode metal into the weld as filler.

Around 1900, A. P. Strohmenger and Oscar Kjellberg released the first coated electrodes. Strohmenger used clay and lime coating to stabilize the arc, while Kjellberg dipped iron wire into mixtures of carbonates and silicates to coat the electrode.In 1912, Strohmenger released a heavily coated electrode, but high cost and complex production methods prevented these early electrodes from gaining popularity. In 1927, the development of an extrusion process reduced the cost of coating electrodes while allowing manufacturers to produce more complex coating mixtures designed for specific applications. In the 1950s, manufacturers introduced iron powder into the flux coating, making it possible to increase the welding speed.

In 1938 K. K. Madsen described an automated variation of SMAW, now known as gravity welding. It briefly gained popularity in the 1960s after receiving publicity for its use in Japanese shipyards though today its applications are limited. Another little used variation of the process, known as firecracker welding, was developed around the same time by George Hafergut in Austria. 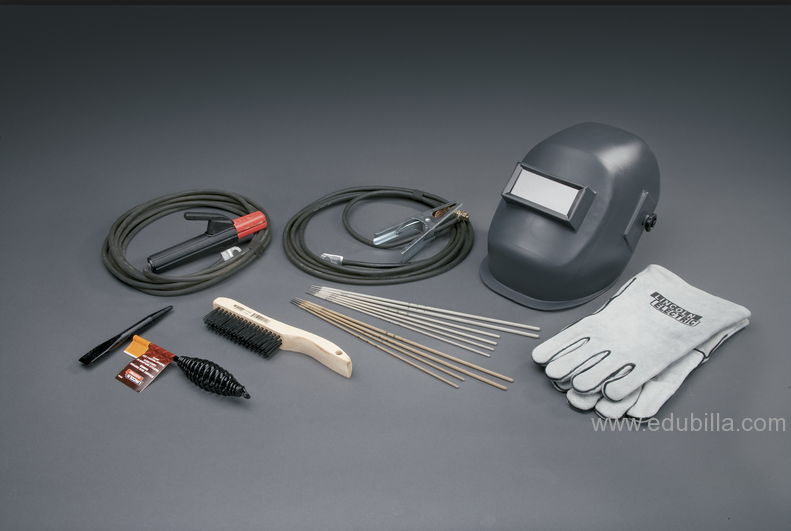 Other inventions in Industrial Machines and Tools