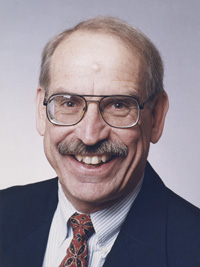 John E. Bercaw (born December 3, 1944) is an American chemist and Centennial Professor of Chemistry at the California Institute of Technology.He is a member of the National Academy of Sciences (elected 1990), and he has received several national awards from the American Chemical Society.His research interests are in synthetic, structural and mechanistic organotransition metal chemistry, including most recently catalysts for polymerization and trimerization of olefins and investigations of hydrocarbon hydroxylation; fundamental transformations and thermodynamics of organotransition metal chemistry; catalysts for hydrocarbon partial oxidation; catalysts for olefin trimerization and polymerization; homogeneous transformations of carbon monoxide and dihydrogen to fuels and chemicals.He won Willard Gibbs Award in 2014.