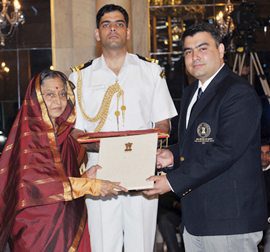 Gagan Narang is an Indian shooter, in Air rifle shooting, supported by the Olympic Gold Quest. He was the first Indian to qualify for the London Olympics. He won the Bronze Medal in the Men's 10 m Air Rifle Event at the 2012 Summer Olympics in London with a final score of 701.1 on 30 July 2012.He received Rajiv Gandhi Khel Ratna Award in 2011 for Shooting.