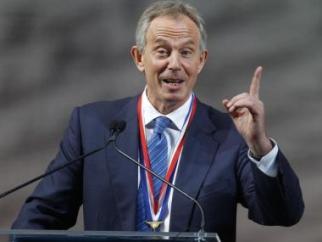 Anthony Charles Lynton Blair (born 6 May 1953) is a British Labour Party politician, who served as the Prime Minister of the United Kingdom from 1997 to 2007. He now runs a consultancy business and performs charitable work. Blair was the Member of Parliament (MP) for Sedgefield from 1983 to 2007 and Leader of the Labour Party from 1994 to 2007. Blair led Labour to a landslide victory in the 1997 general election, winning 418 seats, the most the party has ever held. The party went on to win two more elections under his leadership: in 2001, in which it won another landslide victory, and in 2005, with a reduced majority.He receive Philadelphia Liberty Medal in 2010.