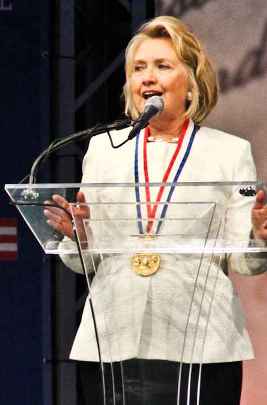 Hillary Diane Rodham Clinton (born October 26, 1947) is an American politician and stateswoman who is a former first lady, former United States Secretary of State in the administration of President Barack Obama from 2009 to 2013, and former United States Senator representing New York from 2001 to 2009. As the wife of President Bill Clinton, she was First Lady of the United States from 1993 to 2001. Clinton unsuccessfully ran for the 2008 Democratic presidential nomination, and is currently running for the 2016 nomination.He receive Philadelphia Liberty Medal in 2013.