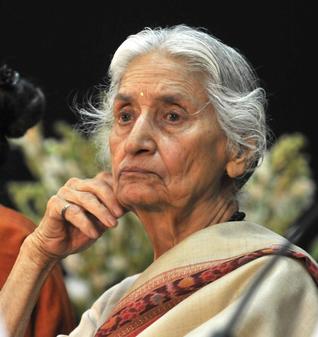 Kapila Vatsyayan is a leading Indian scholar of classical Indian dance, Indian art and Indian architecture and art historian. She was the founding director of the Indira Gandhi National Centre for the Arts, Delhi, and continues as its chairperson. She was born on 25 December 1928 in Delhi. She completed M.A. in English literature from Delhi University and M.A. from the University of Michigan. She did PhD from Banaras Hindu University. In 1987, she became the founder trustee and member secretary of Indira Kalakendra. In 1993, she became its director and held the post till year 2000. She was nominated as a member of the Upper house of Parliament of India in 2006; but she resigned the post following the office of profit controversy. In April 2007 she was re-nominated and the term expired in 2012.

She has published about 20 books related to Indian art. Bharata: The Natyasastra, Dance in Indian painting, Traditional Indian Theatre Multiple Streams, Traditions Of Indian Folk Dance, Concepts Of Space: Ancient And Modern, Arrested Movement Incredible India: Sculpture & Painting and Indian classical dance are a few among her solo works. She has also attributed to the books like Indian Sculpture and The Transformation of Nature in Art. In 1970, she was awarded the Sangeet Natak Akademi Fellowship, the highest honour conferred by the Sangeet Natak Akademi, India's National Academy for Music, Dance and Drama. This was followed by the Lalit Kala Akademi Fellowship, the highest honour in the fine arts, given by Lalit Kala Akademi, India's National Academy of Art in 1995. In 2011, she was a recipient of the Padma Vibhushan, India's second highest civilian honour, awarded by the Government of India.