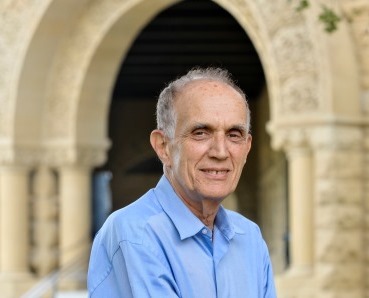 Bradley Efron is an American statistician best known for proposing the bootstrap resampling technique, which has had a major impact in the field of statistics and virtually every area of statistical application. The bootstrap was one of the first computer-intensive statistical techniques, replacing traditional algebraic derivations with data-based computer simulations. He was born on May 24, 1938 in Saint Paul, Minnesota, United States. He attended the California Institute of Technology, graduating in Mathematics in 1960. He arrived at Stanford in fall of 1960, earning his Ph.D., under the direction of Rupert Miller and Herb Solomon, in the Department of Statistics. This year, Efron has been named as the recipient of the Royal Statistical Society's highest honour, the Guy Medal in Gold. The award, which is only bestowed every three years, was made in recognition of his seminal contributions to many areas of statistics, including empirical Bayes analysis, the analysis of survival data, applications of differential geometry to statistical theory and analysis of multiple testing problems in inference for gene expression data. He has won numerous other honours recognising his contributions to theoretical and applied statistics, including the US National Medal of Science.