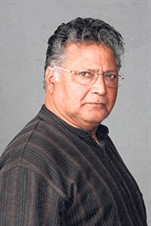 Vikram Gokhale is a well known Indian film, television and stage actor, notable for his roles in Marathi theatre and Hindi films and television. He is the son of another well known veteran Marathi theater and film actor Chandrakant Gokhale. He was born on 30 October 1947 in Pune, India. He learnt acting under the guidance of the ex-director of National School of Drama in Delhi, Mrs. Vijaya Mehta. He is serving as the director of National Center for the performing arts in Mumbai. Vikram Gokhale runs a real estate firm in Pune known as Sujata Farms. He is also interested in social service. He founded an organization to work for the disabled soldiers, education of orphan children, unaffected kids of leper parents, etc. He was teaching the science of dramaturgy with the techniques of theater and television in P. B. S. I. at Pune. He is appointed as the visiting professor of science of dramaturgy at Shivaji University at Kolhapur.