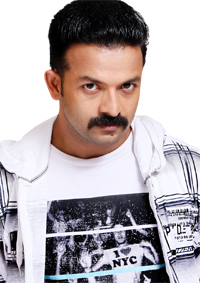 Jayasurya is an Indian film actor, producer, impersonator, and singer. He has starred in over 75 Malayalam films mostly in lead roles, but also in some character and few antagonist roles. He was born on 30 August 1978 in Thrippunithura, Kochi, India. Jayasurya started his career as a television artist and as an anchor. He became popular among the family audiences as an anchor in musical programs. He also did a show 'Jagathy Vs Jagathy' on Surya TV and this program was a great success and has helped him a lot in his career growth. He dubbed for films and is also a mimicry artist by profession. He acted in some small roles in several films like 'Dhosth', and as a comedy artist in 'Aparanmar Nagarathil'. After such films he got a chance to appear in the silver screen as a hero.

The film 'Oomapenninu Uriyaadapayyan', directed by Vinayan which was released in 2002 was the first Malayalam film of Jayasurya, as a hero. In this movie Kavya Madhavan was the heroine. Jayasurya acted as 'Bobby Oommen' the role of a speechless young man from a poor family who fell in love with 'Gopika'(Kavya Madhavan), who is also deaf and dump. Through this incident the story is progressing. He got a great chance to act with Cochin Haneefa, Mala Aravindan, Harisree Ashokan, Sai Kumar, Sudeesh, Indrajith, Jagadeesh, Bindhu panikkar, Kalpana etc. This film was a big hit at box office and was remade to Tamil. 'En Mana Vaanil' is the Tamil version of this movie and this is the first Tamil film of Jayasurya and this film was also directed by Vinayan and Kavya Madhavan was the heroine again. After this, his films like 'Pranaya Mani Thooval', 'Kattu Chembakam' were flop at box office. He then acted in a Kamal film 'Swapnakkodu' in the year of 2003 with Pritviraj, Kunchako Boban, Meera Jasmine and Bhavana. This was a block-buster in box office and became an extraordinary campus hit in Malayalam. Next he acted in two mega hit movies in the lead role. In the year 2003 the movie 'Pulival Kalyanam' directed by Shafi was released with Kavya Madhavan as the heroine. This is a love story attached with a family story. Then in 2004 the film 'Chathikatha Chanthu' was released. This was a comedy film directed and written by Rafi Mecartin. By these two films Jayasurya became a renowned star. In 2016, Jayasurya won a Special Jury Award at the 2015 Kerala State Film Awards and a Special Jury Mention at the 63rd National Film Awards for his performance in the films Su.. Su... Sudhi Vathmeekam and Lukka Chuppi.