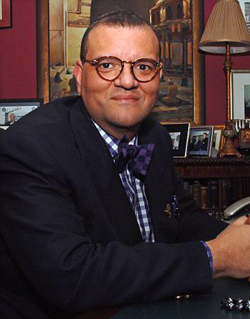 The Reverend Canon Andrew White (born 1964) was the vicar of St George's Church, Baghdad--the only Anglican church in Iraq--until his departure for the sake of security, ordered in November 2014 by the Archbishop of Canterbury. He has thus been dubbed the "Vicar of Baghdad". He is also President of the Foundation for Relief and Reconciliation in the Middle East.He was previously Director of International Ministry at the International Centre for Reconciliation at Coventry Cathedral, England. At the age of 33 years he was diagnosed with multiple sclerosis, a condition which for many years affected his mobility and his speech. He is also an anesthesiologist and has been undergoing a new stem cell treatment for MS at a clinic in Baghdad that utilizes his body's own stem cells and he has said, "It had completely transformed my life." He has had as many as 35 Iraqi bodyguards.He received Civil Courage Prize in 2011.