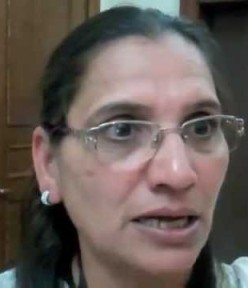 Triveni Acharya is an Indian journalist and activist living in Mumbai, best known for her work with the anti-sex-trafficking group the Rescue Foundation.The group was originally founded by her husband, Balkrishna Acharya, but Triveni Acharya assumed its presidency following his death in a car accident in 2005.The organization is devoted to the "rescue, rehabilitation and repatriation of victims for human trafficking from different parts of India, Nepal & Bangladesh and sold for forced prostitution",and has been conducting "brothel raids" since 1993.The organization frees roughly 300 girls a year, and also provides counseling, job training, and HIV testing.Because these raids often result in serious financial loss or imprisonment for sex traffickers, Acharya has received several death threats as the result of her work.She received Civil Courage Prize in 2012.