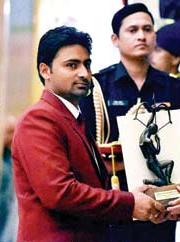 A 26-year-old Army man from Pune, Sandeep Kumar wanted to be a shooter initially. But archery turned out to be his calling.Sandeep, along with teammates Abhishek Verma and Rajat Chauhan, pulled off a remarkable feat when they beat a fearsome Korean team to win the men's compound archery event at the Asian Games last year.He received Arjuna Awards in 2015 for Archery.