Your Vote.... Your Voice 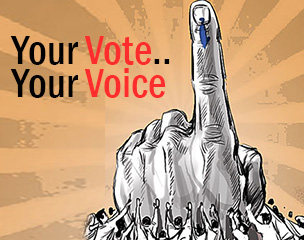 In a democratic country, voting is a right, duty, privilege and responsibility of every citizen. Take it seriously, don’t sell your vote for money or any other benefits. Your vote has the ability to solve many problems and create a great revolution in the nation. It is biggest weapon which will change your life, situations and future. Election is an opportunity for bringing in lot of changes in the country.

Once you attain the age 18, you are a major and you have the right to vote. You have the ability and right to decide for whom you are going to vote. Take time and think about the past activities and future plan of a particular party before you cast your vote. If are not sure about this ask from your parents and others. Huge number of voters are from youngsters hence youth play a vital role in election.

If you are blaming the parties involved in the elections and refuse to cast your vote then you are allowing the political process to take place without your involvement by giving up your duty. Remember that those who don’t fulfill their responsibility towards the country, have no right to ask for their rights.

Some people would say that they will vote in NOTA, as they are not satisfied by any of the parties. This is a negative act which may spoil the political system in the country.

If you wish to bring some positive changes in your life and our nation then cast your vote as its your voice. Let your voice be heard....