The Long Death of Creative Teaching 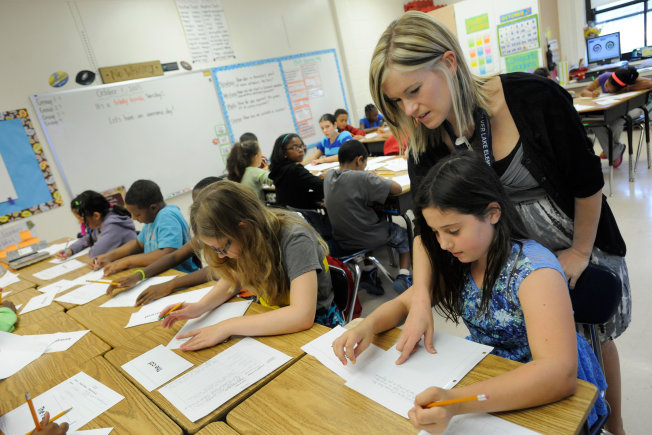 I once saw an eighth grader who was on the verge of being tossed out of his middle school even though he was one of the brightest kids there. When asked why he was failing, he said, “Why should I be doing the same frickin' thing since I was in third grade?" Another student I heard about could comprehend the whole "Harry Potter" series before she was 11 and read two novels a week, yet thinks she “sucks at English” because she is more nuanced in her thinking than the questions on standardized tests allow. She learned to hate reading.

Why did this happen to them? The answer lies in the drive to commonize education.

But as teacher-blogger Jose Vilson, puts it, "People who advocate for the [Common Core standards] miss the bigger picture. ... [They] came as a package deal with the new teacher evaluations, higher stakes testing, and austerity measures, including school closings." The Common Core is just the last of a series of politicized and incentivized business models inappropriately being applied to education.

Attempts to commonize education to make the U.S. more economically competitive started with the use of Frederick Winslow Taylor's scientific management in public, not private, schools during the early 20th century to train workers, not leaders, for our new industrial economy. During the 1950s, the launch of the USSR's Sputnik then led to an infusion of federal dollars to improve science education.

But it was the publication of “A Nation at Risk” in 1983 that was commonizing's great leap forward.According to the author of "Finnish Lessons," Pasi Sahlberg, international corporate and national leaders then decided in the early 1990s on a "close interplay between education policies and economic strategies."

Which nation refused to join? Finland, which is considered to have the world's top education system.

In 2001, President George W. Bush, with bipartisan help, brought us No Child Left Behind, an education reform law based on the goal that high standards and establishing measurable goals would improve individual outcomes. That law also gave states the impossible goal of achieving 100 percent proficiency in English and math by 2014. In 2009, also with bipartisan support, the Obama administration then launched Race to The Top, created to "spur innovation and reforms in state and local district K-12 education."

The net result was a huge standardized testing craze used to rate students, teachers and schools that led to stressed out students, frustrated teachers, anxious administrators and cheating and closed schools.

elying on national standardized tests to evaluate naturally leads to the next logical step: nationally standardized curricula. To date, 45 states and the District of Columbia have adopted the Common Core standards.

The Common Core has been sold through sloganeering that, in her latest book, "Reign of Error," education expert Diane Ravitch has claimed is Orwellian in nature, as big lies and repetitious slogans indoctrinate the public. "War is Peace," "Freedom is Slavery," and "Ignorance is Strength," have become "No Child Left Behind," "Students First," and "Educators for Excellence."

The Common Core standards themselves were actually developed by Achieve Inc. According to educator-blogger Anthony Cody and early childhood expert Nancy Carlsson-Paige, no teachers were in the work groups charged with drafting the standards. Almost all 35 people in the feedback groups were university professors, and of the 135 reviewers, not one was a K-3 teacher, early childhood professional or parent. One K-12 teacher was found to be in the entire process and any other K-12 teachers associated with the products were brought in after the fact mostly to endorse and legitimize them.

Understandably, proponents of the Common Core say they want greater depth of instruction and lessons that engage students. They say that the standards are only a guide. But reformers betray their cause by over-emphasizing tests and grading teachers with formulas and test scores demanded by both No Child Left Behind and Race to the Top.

To try to live up to the new demands and ensure better test scores, states, districts and schools have purchased resources, materials and scripted curricular modules solely developed for test success. Being lost is the practical wisdom and planned spontaneity necessary to work with 20 to 35 individuals in a classroom. Academic creativity has been drained from degraded and overworked experienced teachers. Uniformity has sucked the life out of teaching and learning.

Good and great teachers leave and are replaced by new and cheap workers more willing to follow fool-proof, factory-like, prescribed lesson plans. In fact, the average teaching tenure has dropped from approximately 15 years of service in 1990 to less than five in 2013.

Imagine your brain surgeon having to "follow the book" while operating on you or lose his job. While you are on the table, he discovers an unforeseen problem that, because of his experience and practical wisdom, calls for a spontaneous change of plan, yet he can't do what he knows will work. You die on the table. So have students. He retires early, frustrated with conditions. So have the best teachers.

Top down innovation is what Common Core and other efforts to homogenize education are bringing us. So the only real question left is: Why have President Obama, Education Secretary Arne Duncan, the National Governors Association, the Council of Chief State School Officers, Bill Gates and Achieve Inc. chosen to be orderly but dumb, especially when the opportunity cost is children?