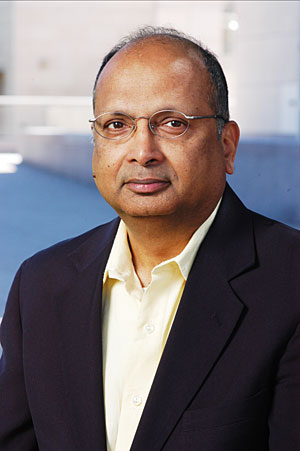 Arogyaswami J. Paulraj is a distinguished Indian-American electrical engineer. A former Commodore in the Indian Navy, he is currently a Professor Emeritus in the Dept. of Elect. Engineering at Stanford University. He was born on 14 April 1944 in Pollachi, Coimbatore District, Madras Presidency, British Raj. Paulraj received his bachelor's degree in electrical engineering from the Naval College of Engineering, Lonavala, India, and his doctorate in electrical engineering from the Indian Institute of Technology, New Delhi. He is a pioneer of MIMO wireless communications, a technology break through that enables improved wireless performance. MIMO is now incorporated into all new wireless systems.

Paulraj is the author of over 400 research papers, two text books and a co-inventor in 59 US patents. Paulraj has won over a dozen awards, notably the Marconi Prize and Fellowship, 2014 and the IEEE Alexander Graham Bell Medal, 2011. He is a fellow of seven scientific academies including the US National Academy of Engineering and the Royal Swedish Academy of Engineering Sciences. He is a fellow of IEEE and AAAS. In 1999, Paulraj founded Iospan Wireless Inc. - which developed and established MIMO-OFDMA wireless as the core 4G technology. Iospan was acquired in by Intel Corporation in 2003. In 2004, Paulraj co-founded Beceem Communications Inc. The company became the market leader in 4G-WiMAX semiconductor and was acquired by Broadcom Corp. in 2010. During his 30 years in the Indian (Navy) (1961-1991), he founded three national level laboratories in India and headed one of India's most successful military R&D projects APSOH sonar. He received over a dozen awards (many at the national level) in India including the Padma Bhushan, Ati Vishist Seva Medal and the VASVIK Medal.