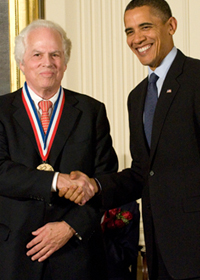 Stanley Benjamin Prusiner M.D is an American neurologist and biochemist. Stanley B. Prusiner is Director of the Institute for Neurodegenerative Diseases and Professor of Neurology and Biochemistry at the University of California San Francisco (UCSF). Prusiner was born on May 28, 1942, in Des Moines, Iowa, to Lawrence and Miriam Prusiner. He received his B.A. in Chemistry in 1964 and his M.D. in 1968 from the University of Pennsylvania. After completing his military service as a lieutenant commander in the U.S. Public Health Service at the National Institutes of Health and his neurology residency training at UCSF, he joined the UCSF faculty in 1974 and set up a laboratory to study brain diseases.

Prusiner received the Albert Lasker Basic Medical Research Award (1994) and the Louisa Gross Horowitz Prize (1997) for his discoveries pertaining to neurodegenerative disease. After he was appointed director of the Institute for Neurodegenerative Diseases at the University of California, San Francisco, he founded InPro Biotechnology, Inc. (2001). The company was designed to further develop and commercialize discoveries and technologies conceived in his laboratory at the university. Among the technologies promoted by InPro was a test to detect bovine spongiform encephalopathy in cattle and sheep, chronic wasting disease in deer and elk, and Creutzfeldt-Jakob disease in humans. Prusiner also wrote several books during his career, including Slow Transmissible Diseases of the Nervous System and Prion Biology and Diseases (2004). He received the National Medal Of Science in 2009.