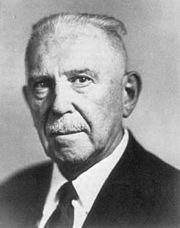 Solomon Lefschetz was an American mathematician who did fundamental work on algebraic topology, its applications to algebraic geometry, and the theory of non-linear ordinary differential equations. He was born on in September 3, 1884, Moscow, Russia. In his early research in algebraic geometry Lefschetz made innovative use of topological methods, winning the Bordin Prize of the Paris Academy of Sciences in 1919 and the Bacher Prize of the American Mathematical Society in 1924. In the twenties he began to concentrate on topology itself, proving his famous "fixed point formula'' and the "Lefschetz duality theorem.'' ``Topology'' is a word he coined in 1930 as the title for a monograph that brought this subject to the forefront of pure mathematics. During the Second World War, he turned his attention to more applied mathematics nonlinear differential equations, stability theory, and control theory -- in which he continued to work the rest of his life. He wrote over 100 papers, as well as a number of books and monographs. In 1964 when he was eighty-one, he was awarded the National Medal of Science "for indomitable leadership in developing mathematics and training mathematicians.'' He died on October 5, 1972 in Princeton, New Jersey, United States.