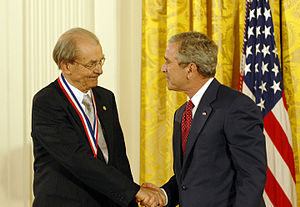 Jan Drewes Achenbach is a professor emeritus at Northwestern University. Achenbach was born on 20 August 1935 in the northern region of the Netherlands, in Leeuwarden. He studied aeronautics at Delft University of Technology, which he finished with a M.Sc. degree in 1959. Thereafter, he went to the United States, Stanford University, where he received his Ph.D. degree in 1962. Achenbach has developed methods for flaw detection and characterization by using contact transducers, imaging techniques and laser-based ultrasonics. He has also developed methods for thin-layer characterization by acoustic microscopy. He received the National Medal Of Science in 2005.