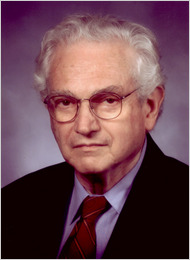 Marshall Warren Nirenberg  was an American biochemist and geneticist. Marshall Warren Nirenberg was born in New York City on April 10th, 1927, the son of Harry and Minerva Nirenberg. In 1948 he received a B. Sc. degree, and in 1952, a M. Sc. degree in Zoology from the University of Florida at Gainesville. During this period he became interested in biochemistry. He continued studies in this field at the University of Michigan, Ann Arbor, and in 1957 received the Ph. D. degree from the Department of Biological Chemistry.

His research earned him the National Medal of Science in 1964, and the following year he was elevated to director of biochemical genetics at the NIH, a position he held for the remainder of his career. Nirenberg's later research focused on neuroscience, neural development, and the homeobox genes.  He died on January 15, 2010, from cancer after several months of illness.