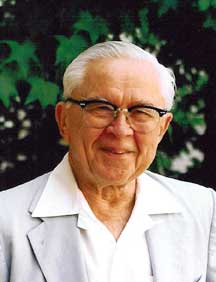 Edward Butts Lewis was an American geneticist, a corecipient of the 1995 Nobel Prize in Physiology or Medicine. Ed was born in Wilkes-Barre, Pennsylvania, on May 20, 1918. Dr. Lewis received the B.A. degree from the University of Minnesota in 1939 and the Ph.D. from the California Institute of Technology in 1942. He joined the Caltech faculty in 1946 as an instructor. In 1956 he was appointed Professor of Biology and in 1966 Thomas Hunt Morgan Professor of Biology.

He is a member of the National Academy of Sciences, the Genetics Society of America, the American Philosophical Society, and the American Academy of Arts and Sciences. He is a foreign member of the Royal Society (London) and an honorary member of the Genetical Society of Great Britain. He is a recipient of the Thomas Hunt Morgan Medal (1983), the Gairdner Foundation International award (1987), the Wolf Foundation prize in medicine (1989), the Rosenstiel award (1990), the National Medal of Science (1990), the Albert Lasker Basic Medical Research Award (1991), and the Louisa Gross Horwitz prize (1992). He holds honorary degrees from the University of Umea, Umea, Sweden (1981) and the University of Minnesota (1993). He died on July 21, 2004 in Pasadena, California.