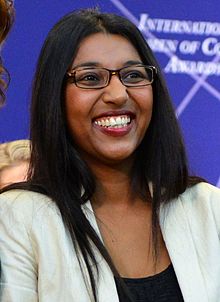 Roshika Deo (born December 12, 1981) is a Fijian politician and activist. She is the founder of Be The Change Campaign/Movement in Fiji, which is a movement endorsing feminism, LGBTIQ, disability, human rights, and environmentalism. Her organisation stands on the pillars of bringing social, political, economic and cultural change to Fiji, Roshika Deo is contending for the Fiji National Elections in September, 2014, and was the first to sign up.She has also been criticised by many members of the FijiFirst and SODELPA parties, as well as members of Methodist Church in Fiji, and had difficulty gaining enough signatures of support to officially become a candidate.She was given the New Zealand Defender of Human Rights award in 2013.She also received a 2014 International Women of Courage award.