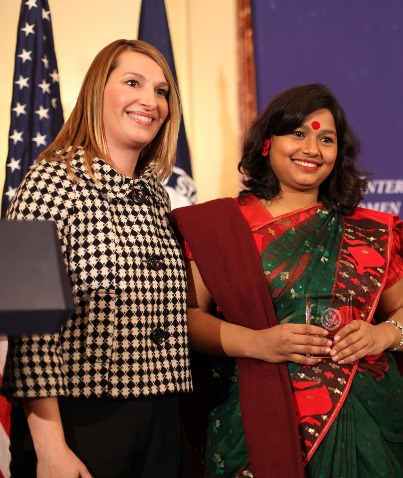 Nadia Sharmeen is a crime reporter from Bangladesh, who in 2015 won the US State Department's International Women of Courage Award.In 2013 Sharmeen was covering an Islamic rally for her employer Ekushey Television, when she was attacked by the Hefazat-e-Islam activists. The rally was being held to demand restrictions on the open association of males and females in the same space, punishment of atheists, wearing of scarves by women, and other religiously based precepts.

The Hefazat activist's 13-point demand list specifically called for the government to abandon the current Women's Policy, which had been designed to create gender equality.While there were no reported incidents of violence between activists and police, journalists were attacked and tortured in many places in Dhaka and Chittagong,as were women garbage collectors.Sharmeen's attackers targeted women who were not wearing the hijab. Nadia believed she was attacked, “only because I am a woman”.