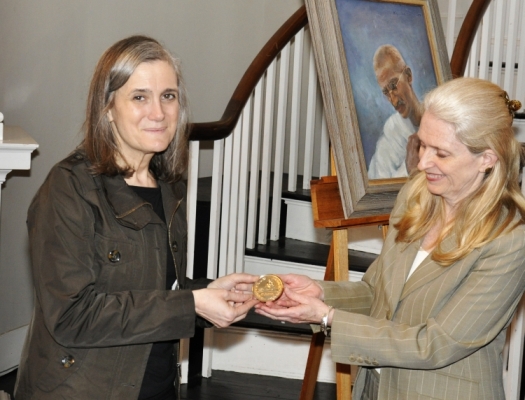 Amy Goodman (born April 13, 1957) is an American broadcast journalist, syndicated columnist, investigative reporter and author. Goodman's investigative journalism career includes coverage of the East Timor independence movement and Chevron Corporation's role in Nigeria. Since 1996, Goodman has hosted Democracy Now!, an independent global news program broadcast daily on radio, television and the Internet. She is the recipient of numerous awards, including the Thomas Merton Award in 2004, a Right Livelihood Award in 2008, and an Izzy Award in 2009 for "special achievement in independent media". In 2012, Goodman received the Gandhi Peace Award for a "significant contribution to the promotion of an enduring international peace". Goodman is the author of five books, including the 2012 The Silenced Majority: Stories of Uprisings, Occupations, Resistance, and Hope.