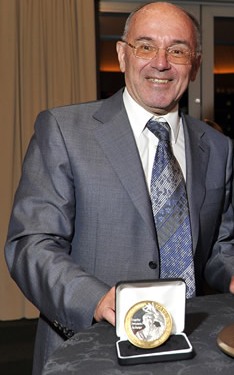 Erik De Clercq (1941) is a Belgian physician and biologist. He studied medicine at the Catholic University of Leuven (Leuven, Belgium). He did research and later became a professor at the Department of Medicine, where he specialised in microbiology and immunology. He worked at the Rega Institute for Medical Research.He received Dr. Paul Janssen Award for Biomedical Research in 2010 for his pioneering contributions to basic and clinical research in the areas of AIDS and other immunodeficiencies, both as a scientist and through his service as the Director of the NIAID. Dr. De Clercq was recognized for his landmark discoveries in anti-HIV medications, including nucleotide analogues, and inventions or co-inventions of several approved drugs for anti-viral therapy.