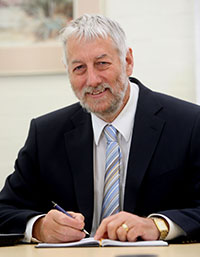 Graham John Hutchings is a British chemist, professor and Pro Vice-Chancellor for Research at Cardiff University.His scientific career has included being Scientific Officer (1975–79) and Research and Production Manager (1979-1981) at ICI Petrochemicals and Chief Scientific Officer at AE & CI (African Explosives and Chemical Industries), Modderfontein, South Africa (1981–84). He was then in turn Lecturer, Senior Lecturer and Professor in the Department of Chemistry, University of Witwatersrand (1984–87) followed by Assistant Director (1984–94) and Professor and Deputy Director (1994–97) at the Leverhulme Centre for Innovative Catalysis, University of Liverpool.He received Davy Medal in 2013 for the discovery of catalysis by gold and for his seminal contributions to this new field of chemistry.