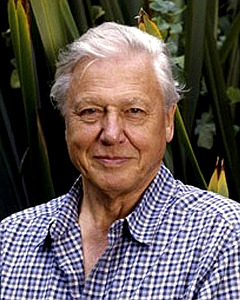 Sir David Frederick Attenborough (born 8 May 1926) is an English broadcaster and naturalist.He is best known for writing and presenting the nine Life series, in conjunction with the BBC Natural History Unit, which collectively form a comprehensive survey of animal and plant life on the planet. He is also a former senior manager at the BBC, having served as controller of BBC Two and director of programming for BBC Television in the 1960s and 1970s. He is the only person to have won BAFTAs for programmes in each of black and white, colour, HD, and 3D.He received Bodley Medal in 2015 for naturalist category.