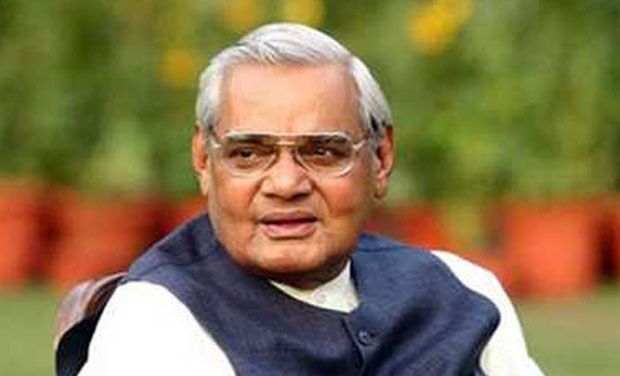 Atal Bihari Vajpayee, a veteran Indian politician for over four decades, has served

India as the 10th Prime Minister. The tenure of his Prime Ministership includes three non-consecutive terms, the first being in 1996 for 13 days, the second from 1998 to 1999 for a period of 13 months, and a full five-year term from 1999 to 2004. In his political stint he has been elected nine times in the Lok Sabha or the Lower House of the Parliament and twice in the Rajya Sabha or the Upper House of the Parliament. He has contested from four different states of Madhya Pradesh, Uttar Pradesh, Delhi and Gujarat in different elections. The first election that Vajpayee won was from Balrampur. He was a member the Bharatiya Jana Sangh party that was initiated by Shri Shyama Prasad Mookerjee on 21October 1951. Vajpayee served as the President of the party from 1969 to 1972. Atal Bihari Vajpayee was also the Foreign Minister of India in 1977 when Janata Party won Lok Sabha elections and Morarji Desai became the new Prime Minister of India.

Atal Bihari Vajpayee was born on 25 December 1924 in Gwalior to a middle-class Brahmin family of Shri Krishna Bihari Vajpayee and Smt. Krishna Devi. Pandit Shyam Lal Vajpayee, grandfather of Atal Bihari Vajpayee, migrated to Gwalior from their ancestral village Bateshwar in Uttar Pradesh. His father was a school master and a poet. Atalji completed his schooling from Saraswati Shishu Mandir, Gorkhi in Gwalior. He completed his graduation in Hindi, Sanskrit and English from the Victoria College in Gwalior, now known as the Laxmi Bai College. Thereafter, he studied in DAV College, Kanpur and completed his M.A. in Political Science with a first-class degree.He is fondly called Baapji by his close relatives and friends. He remained single for his entire life and later adopted a daughter, Namita. He loves Indian music and dance. Atal Bihari Vajpayee is a nature lover and Manali in Himachal Pradesh is one of his favoured retreats.He has retired from politics due to health issues and is currently known to be suffering from dementia and diabetes. Close aides say he fails to recognize people and mostly stays at home, except for his check-ups that are conducted at the All India Institute of Medical Sciences.Professional Life of Atal Bihari Vajpayee