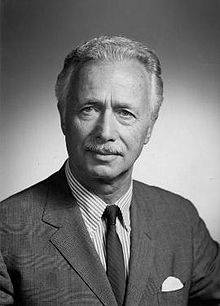 Pietro Belluschi was an Italian-born American architect, a leader of the Modern Movement in architecture, and was responsible for the design of over 1,000 buildings. He was born on August 18, 1899 in Ancona, Italy. He achieved a national reputation within about 20 years, largely for his 1947 aluminum-clad Equitable Building. In 1951 he was named the dean of the MIT School of Architecture and Planning, where he served until 1965, also working as collaborator and design consultant for many high-profile commissions, most famously the 1963 Pan Am Building. He won the 1972 AIA Gold Medal. Graduating in 1922 as a civil engineer from the University of Rome, Belluschi went to the United States on a scholarship and continued civil engineering studies at Cornell University. He practiced architecture until 1950, and the following year he became dean of the School of Architecture and Planning at the Massachusetts Institute of Technology. After retirement in 1965 he continued to lecture and served as adviser to the U.S. State Department in South Korea and the Philippines.